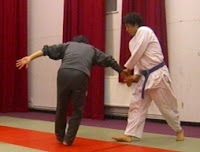 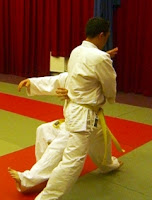 I got a few shots on the camera and will intersperse the text here with a few of the more interesting ones.

The counter techniques in this kata are all about timing, blending and taking control of the situation. If any of these three principles are missing then the counter will not work.

If you mistime when to counter a technique you either are too late and get thrown or you are too early (not sure if this is possible in reality…) and the attacker realises what you are doing and stops you. 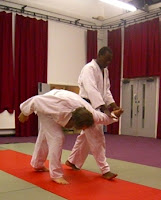 If you do not blend with the attacker then you will end up fighting against their technique and the person with the most power will win. This point is tightly linked with timing. You can only blend if the timing is right and if you do not blend then that often means that you mistimed or you simple don’t understand the direction and goals of the counter. 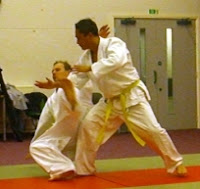 Finally you must then take over the technique. It is all well and good blending into a technique with perfect timing but then not controlling the centre, having bad posture and ultimately giving the technique back. Part of the beauty of good counters is that the other person really thinks that they are going to throw you and suddenly the tables are turned and they find themselves on the floor. Wonderful stuff when you pull it off.

Of course everything that I have just said is also true for all aikido techniques, whether techniques from simple attacks or from counters. The nice thing about counter techniques is that they force you to consider these things more closely. It also provides the basis for more free flowing aikido. For instance, once you can string a few counters together it is possible to practice a form of freeplay sparring where neither partner is the attacker or thrower but both more through a series of attempted techniques, trying to control their partners balance and movement. This takes a long time to achieve and often ends up in battles of strength for those who don’t have the skill not to resist and don’t understand the point of the training.

Finally a note about the word(s) ura-waza. I am not quite sure why this kata uses these words to distinguish it from the randori-no-kata. In most aikido schools ura-waza refers to techniques that are effected from behind uke, usually through a turning motion. This is compared to omote, where the technique is done across and infront of uke. An online dictionary that I used gives the this definition for ura : “reverse side, wrong side, back, undersurface”. This makes sense in the traditional sense of aikido technique. (Omote is defined as “surface, front, right side, face, exterior”). 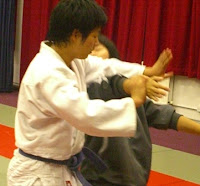 Interestingly the single word urawaza was defined as “underhanded trick”. Now this kind of makes sense. I can imagine a poor student is being attacked by their sensei and thinks they are about to pop a nice technique on when wallop the cheating sensei sends them flying with an underhanded trick, er, I mean, counter technique. 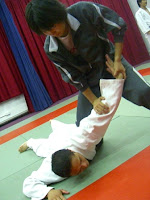 There is also the issue of the shichi-hon-no-ura-waza. In this case the 7 kuzushi (balance breaking) techniques of the shichi-hon are turned into slightly more effective throws, primarily through a change of direction. Considering the more traditional usage of ura and omote, there is a lot of confusion here. Arguably the first two of the ura waza are actually omote while the next four are mostly ura. I am not entirely sure where I stand on the last one probably more tenkai than ura or omote but what do I know? 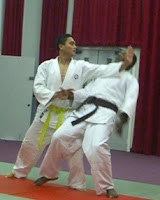 What fun can be had when you get into the semantics of foreign words in technical context?

Looking forward to seeing everyone back in classes in September, fresh from their holidays and ready for some hard training in the run up to John Waite’s visit and on toward Christmas.