Also, we had a visit from Wojciech, a guy from Poland, who was in London for a few days and came and trained at the club for a few sessions. 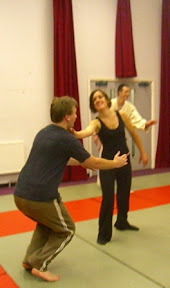 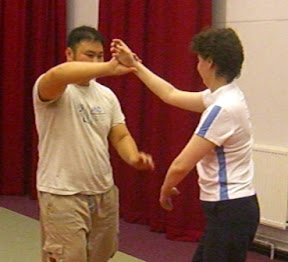 In this class we went over some of the stuff we did last week. I feel it is important at this stage in the course not to over-expose the class to too much aikido as it generally leads to confusion. Instead I try to keep the techniques few and simple. We looked again at oshi-taoshi (push down) and hiki-taoshi (pull down) and added simple attacks, shomen uchi (straight downward chop to the head) and tsuki (straight punch in this case to the stomach). 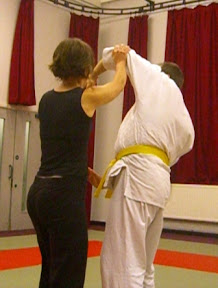 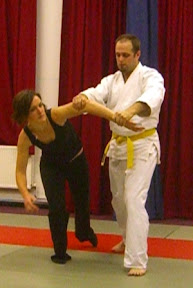 It was noticeable who the introduction of actual attacks led to an increase in effort and tension in most people – even if they were not aware of it. I noticed that whereas before people were comfortably moving through the technique and uke was generously practicing their breakfall, now uke was being forced (if only slightly) down to the ground and there was more grabbing of the arm rather than keeping a relaxed open hand. 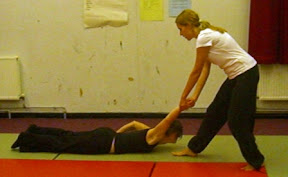 As I mentioned in the class. An important part of learning aikido is cultivating a relaxed body and mind while under the stress of attack. This is partly a philosophical point but mostly it is a physiological one. 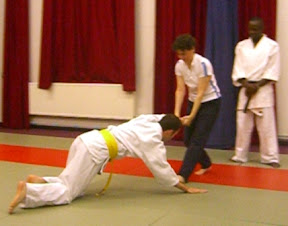 If you are relaxed in your body then you are using the optimum amount of effort to do your work. When tension creeps in you are using muscles unnecessarily and wasting energy. While this can be helpful in intimidating your attacker it usually leads quickly to exhaustion and loss of quality in your technique. 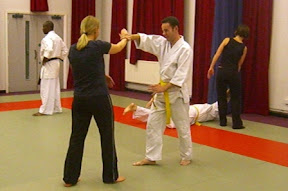 If you are relaxed in your mind then you are open to the situation you are in and don’t tend to freeze up and get locked into a single preprogrammed response to what is happening. You are able to make value judgements about the best course of action, respond to changes in the environment or attacker and also you tend to maintain a relaxed body. Body and mind or closely linked – they each feed off and influence the other.

Anyway enjoy the photos and look at the posture of the people to see which are good and which are poor. 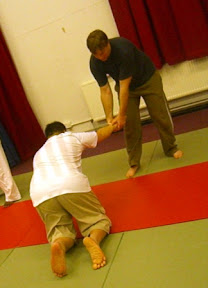