Well done to Simon, Ian and John in passing their grading last night. 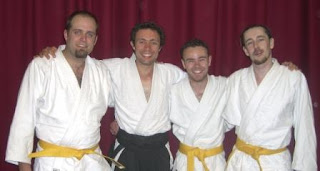 As you can see they are not proudly wearing their yellow belts indicating their promotion to 5th kyu.

It is always difficult to keep up a reasonable level of training during the summer months. People take holidays and there is often a lack of continuity. These guys have made a consistent effort to turn up and it shows in their development.

Tony was also there last night to ratify their grading and was generally pleased with the level. This is also a relief to me as in many ways the development of these guys is a direct reflection on my teaching and Tony is putting a lot of trust in me to keep people who train on a Tuesday night in line with the club as a whole. Of course it is not too problematic because I think all these guys have attended at least some other classes with Tony.

Interestingly, Simon commented that he really enjoyed the session, that it was a good hard work out. This was despite my concern that I did not do much teaching and we did not freeplay at all. I suppose it goes to show that while demonstration and discussion is important giving people time to actually practice and work things through for themselves is crucial. I will consider this in future sessions.

Next week we begin a new beginners’ course. This will mean bringing the pace down a little for a few weeks to get the new guys and girls into the groove but will hopefully provide our new yellow belts with an opportunity to appreciate the progress they have made and while working with the new beginners they may be able to bring themselves back into the “beginner’s mind” way of thinking about their own technique.